Wah! I feel I haven't drawn for s long cause I've been so busy with work and event planning and my crafting. But I got some cool stuff done over the weekend as part of the Cloudscape Comics Fundraiser for Waterlogged: Tales from the Seventh Sea. We are so close to printing this great book! Big thank you to all our contributors and supporters so far! You'll get an amazing book!

So last weekend we held a Drawing Day where the internet threw ideas for drawings and a bunch of Cloudscape artists drew their interpretation of the request. If you go to the Indigogo site you can purchase one of the original drawings that came out of the event. Here are my Spoils of Drawing day! 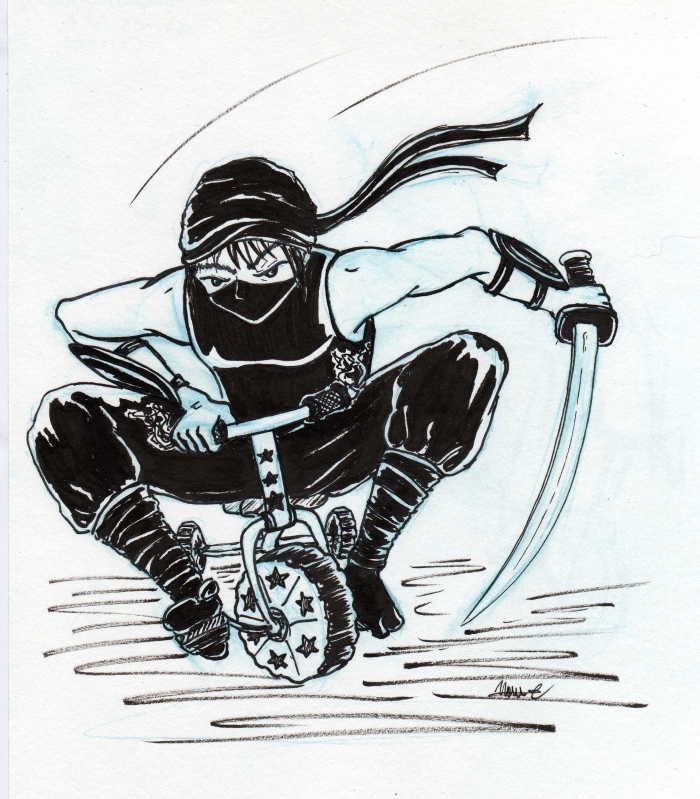 First we had Ninja Tricycle Attack that came up in conversation while planning the event and it stuck with me so I needed to do a tricycle ninja. Copic fine liners and Pentel Brush pen for filling in the blacks. I've got a long way to go in learning how to properly shade black clothes. Need to look up more reference... any suggestions? 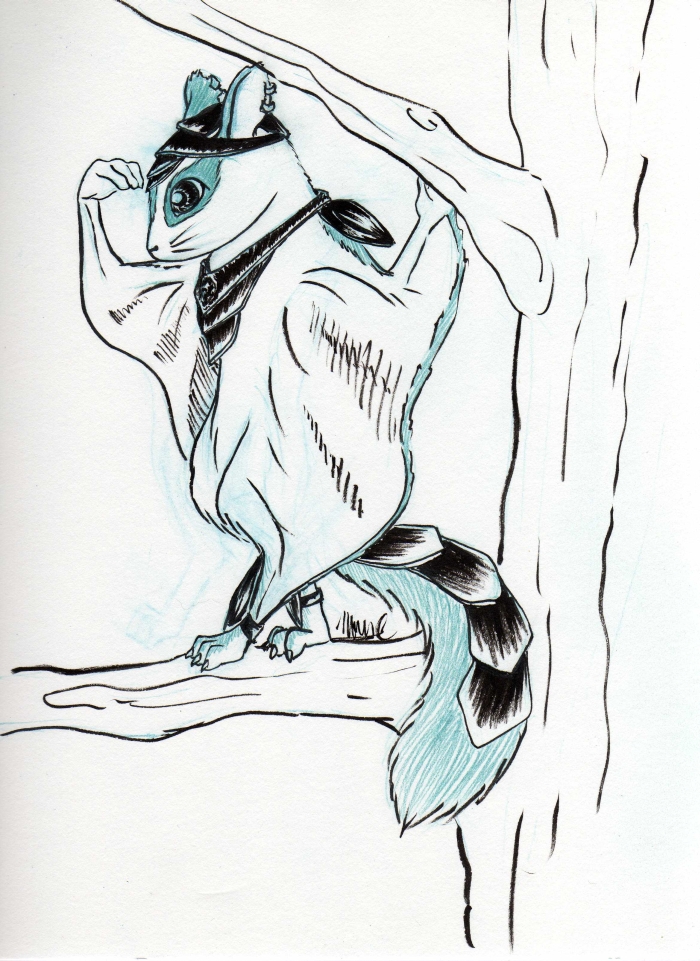 Next a call went out to Angela Melick for Marsupial Superhero which was too good to pass up. Several artists did this... mine turned into a bit of a knight in shiny armor deal with Sir Sugar Glider. I was just using the brush pen on this one so it has a very organic flow and fur is the best with a brush pen, once you get the hang of it. 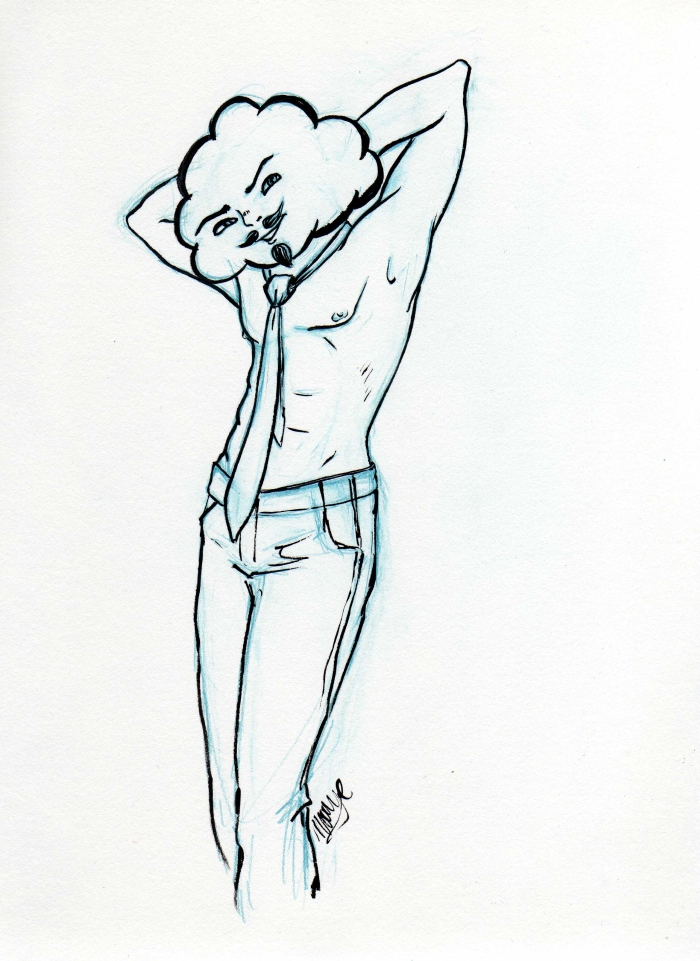 Cloudsy Works Out was up next. To those who don't know Cloudsy along with Umbrella Girl are kind of the Cloudscape Mascots. So someone suggested to do a pinup of Cloudsy and Ta da! There is a second one done by Jonathan Dalton. This was a mix of Copic fine liners and Pentel Brush pen again. 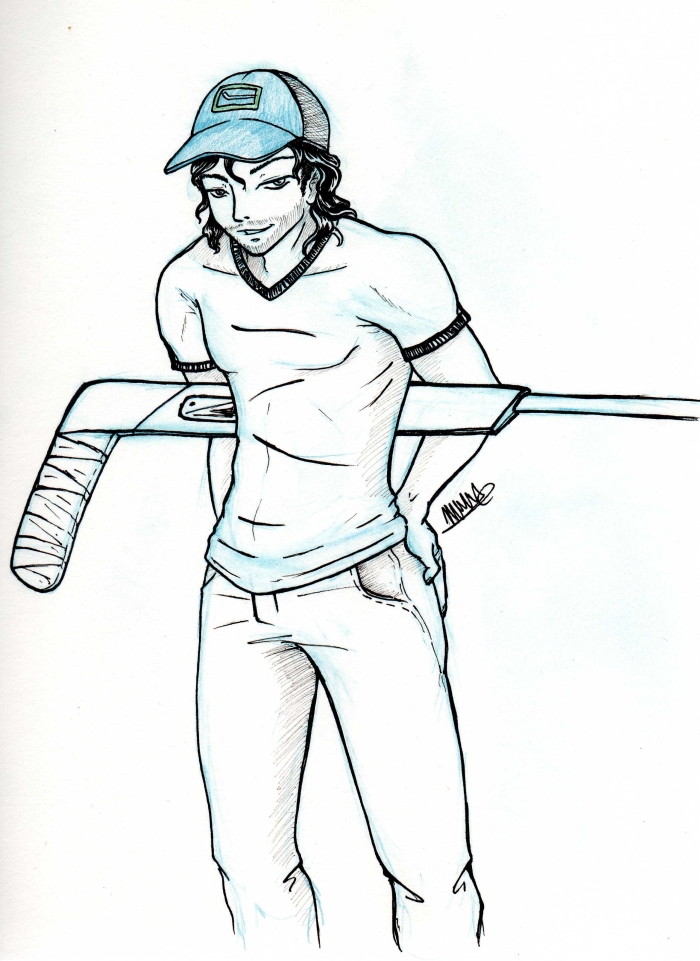 Last but not least and by far the best one is Bishonen Luongo. Someone suggested Canadian Anime. Then we joked that it should be a sports anime so obviously it had to be hockey and so it came that Bishonen Luongo had to be drawn. Copic fine liners all the way... I'm not good at making anime boys with facial hair but it was insisted that he has to have a bit of a rugged appearance. Hope you all enjoy and if you wish to own it they are available through the Indigogo campaign!

So I thought I'd post something a little more finished, get everyone a little more interested in what's happening cause it's exciting! First let's release the sexy pirate Morgan of the Red Pelican! If you look back a few posts you'll see an earlier ink of him he's from a big story I'm working on. And most importantly he'll be appearing in the Pirate Gallery in Cloudscape's next anthology, Waterlogged - Tales from the Seventh Sea! Our fundraising campaign is going strong but we've still got a long way to go. This is going to be a hard cover book with one spot colour featuring some of the most amazing comic artist in Vancouver like Sam Logan (Sam & Fuzzy), Angela Melick (Wasted Talent), Nina Matsumoto (Yokaiden, Bongo Comics), Colin Upton (Postmodern Mini-Comics), Gabriel Frizzera, Lucy Bellwood (Baggywrinkles), Jonathon Dalton (A Mad Tea-Party), Laura Bifano, and Jeff Ellis (Teach English in Japan). Check out all the perks on our Indiegogo campaign and pass the word along!
http://www.indiegogo.com/projects/waterlogged-tales-from-the-seventh-sea 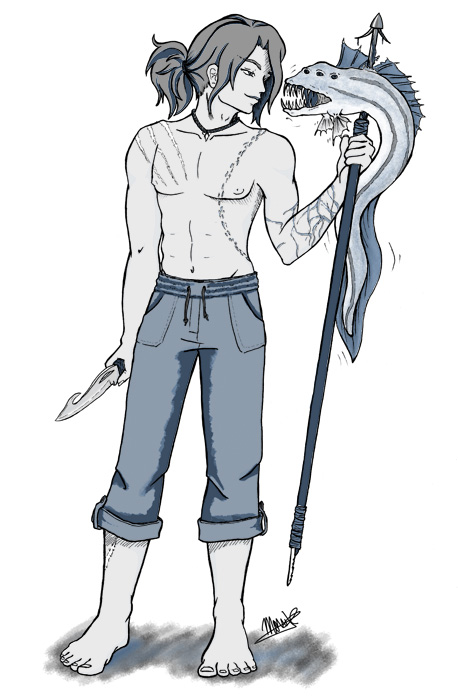 Next we have the finished coloured version of Full Circle which will be for sale at the Ayden Galley from May1 - June 2! Stratus is an art show featuring comic pages and illustrations from local comic artists. Come out May 3 from 7 - 11pm and meet many of the talented minds behind the work! 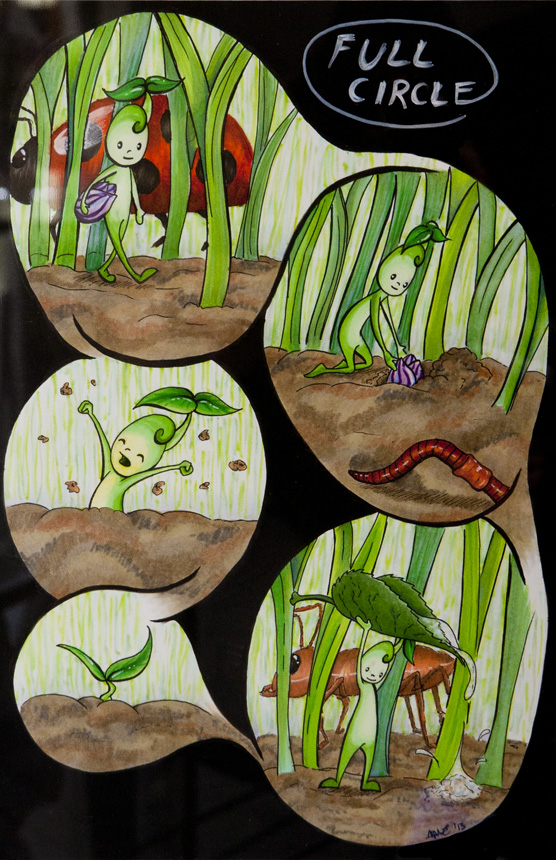 As a mental note, scan before framing, taking pictures of framed art leaves all sort of ghosts over the image.
Posted by Unknown at 15:31 No comments:

I find I do a lot of this, I look back at the things I've done and the things I should have done and I start to wonder if there are more of me and why on earth they don't talk to each other. Week and a half ago I was in the middle of a big project and while I was slaving away at it for 12-14 hours a day the only thing gong through my numb mind was "I should be charging more" in fact the thought was so profound that I had to stop, brake and draw it. 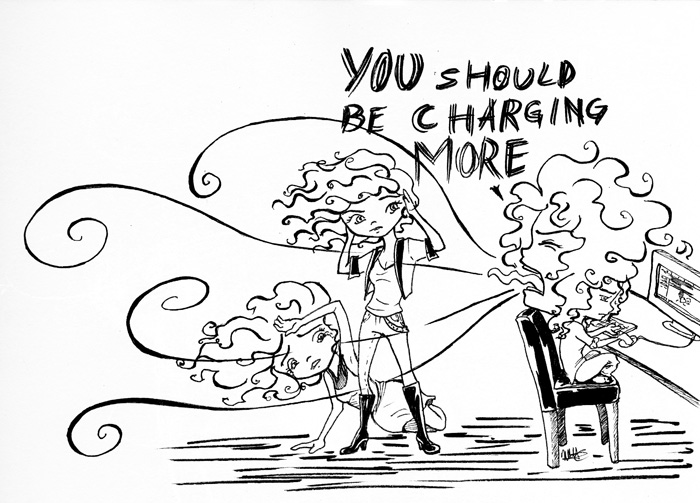 I had a chance to Ink it the other day but really. I need to work on shiny black things cause it's not where I want it to be. But the hair is supper cool. So there is me and my 2 cents to my Past Self (the one standing) and Futures Self (the one cowering) and really it got me no where except for distracted. Like I said I was running on little sleep for about 3 weeks at this point (yey for back to back projects) and what does my tired mind decide to do instead of sleep... obviously keep me up till 3 or 4 in the morning sketching these little conflicts with myself. Here is another... 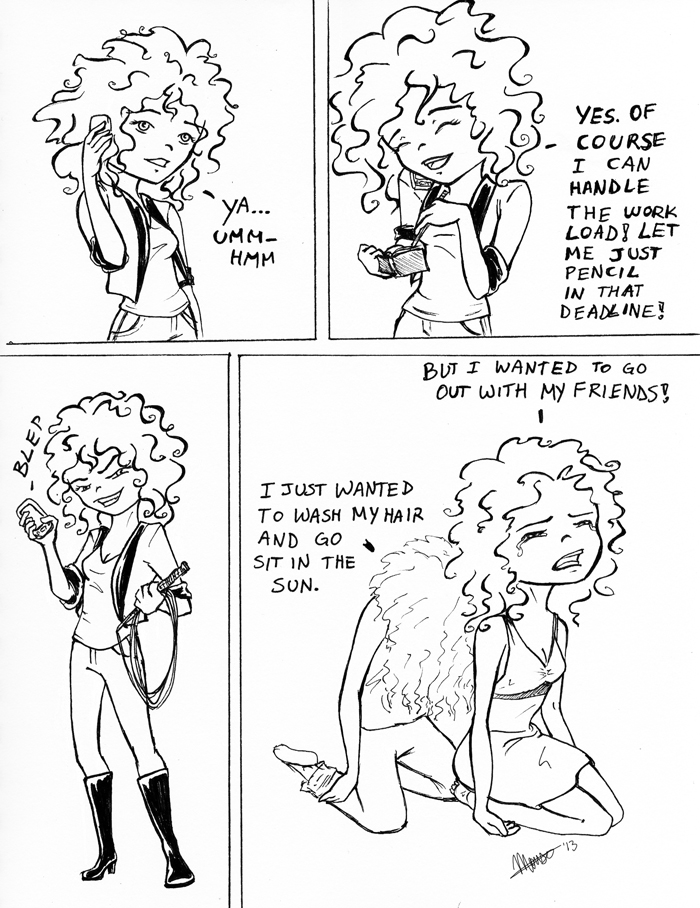 Because my Past Self is a Sadistic-Money-Hungry-I-Could-Care-Less sort of person, she will book back to back to back projects and then start cracking the whip. As a mental note, I should clean up sketches made at 3 in the morning before starting to ink them... things were getting wonky at the end there. And they are floating... yap... definitely finish sketches before inking. On a separate note, although hand lettering has lots of life... I'm not going to do it beyond sound FX. It's just too much...

Wow, when it rains it pours... First I moved then I never seemed to have caught up with work since last November... hahaha. I'll bet back into this now! Sorry for the wait.

Fist we start with the newer one! I'm happy to announce this will be part of the Cloudscape Art Show called Stratus that will be opening on May 3 at the Ayden Gallery. See details here http://www.facebook.com/events/148990701925781/

This is the preliminary ink, still got lots of work before it's done, but by Monday everyone will get to see a finished copy! Started the idea while working at the Vancouver Art Gallery for Family FUSE in the beginning of March. 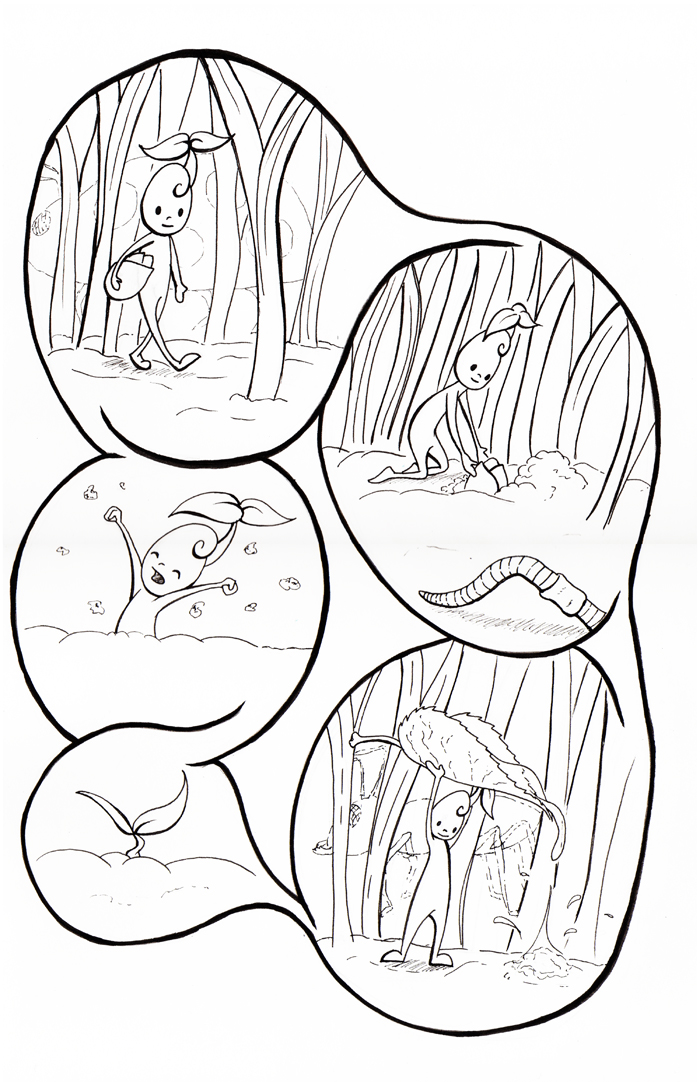 This one is slightly older, I did it as a Family Day poster for an event that Cloudscape was holding. It was a character building class so I was trying to incorporate as many characters as I could. 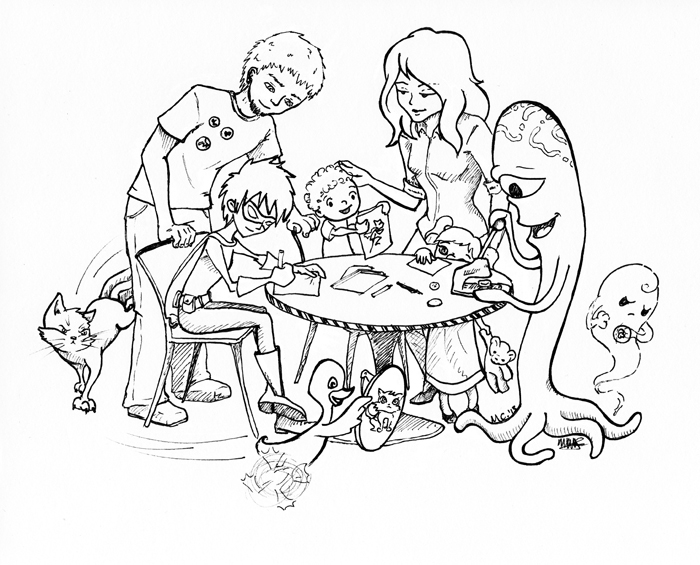 Let's just not go there... So much to do so little time to sketch let alone finish something. First we have another monster Pelquin! >.< () and I get an automatic win cause no one else made a submission. I'm trying to work with the brush pen more. 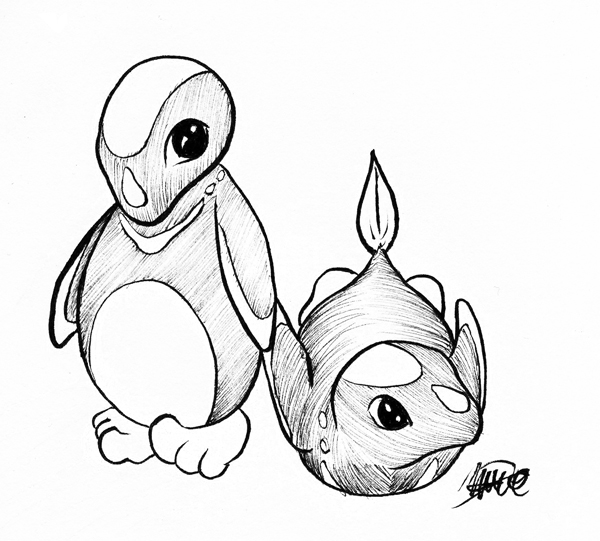 Then I've got Yona the main character of the comic I'm very slowly working on. The pic on the left is how he starts out, then he lets loose a bit and relaxes enough to not do up every button. He is Nix's contact so those two are kind of the main characters of this story. The inking on the right didn't work with me again brush pen... as a mental note if you screw up a little take a two minute brake and calm cause if you keep going that's what happens. Grrr.. 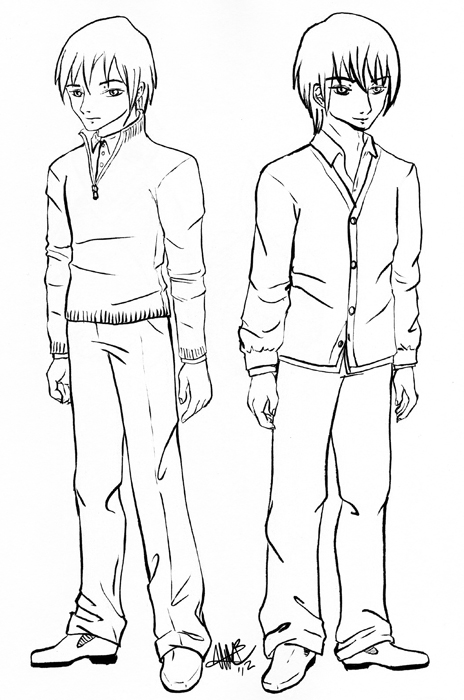 Argh babies are so hard to draw! >.< Why did I write a baby into my next comic... Making a "shark person" baby look cute and still have enough shark traits to easily distinguish it's species it even harder. I don't know what that blob behind Mako is in the first pic...  it started out as an air supply in his tank but then it looked dumb so it morphed into a plushy blanket thing. The hands gave me a run for my money even though i was photo referencing and all... Babies... argh... more practice. 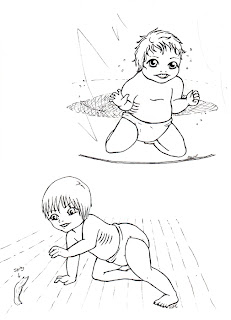 This is the Ophidos from the Cloudscape Monster Alphabet...  Vote for your favorite on the website! I figured this one is one of those that looks almost normal but does something fantastical... maybe like the Cactus Cat... eheheh. 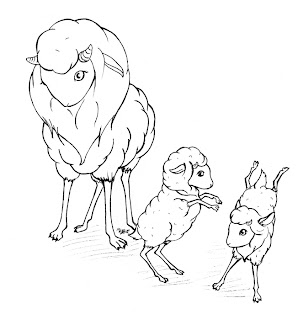 Getting some practice in with the Pantel brush pen and man it ain't easy. First I got some more character drawing of Nix from my future comic project. Is his shirt too... gangster or womanizer? I want him to be casual but interesting on land when he wears clothes... I totally messed up the cross hatching on this picture... with the brush pen there is nothing that can be done in a hurry while you're half paying attention. 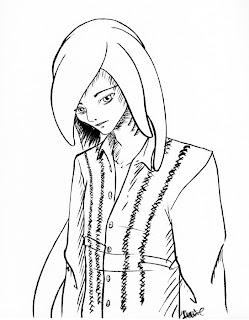 Another monster for the Cloudscape Monster Alphabet. Vote for your favorite Nys Stead starting tomorrow on the website! This is like a cross between an an ant eater, a moose, and a giraffe... not quite what I first had in mind... I wanted to make something majestic... why did the moose get mixed in there? 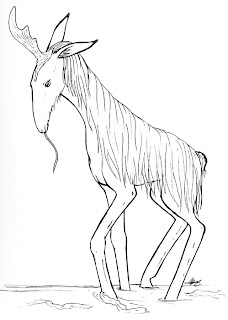