Well I'm not a big fan of pictures of myself cause I think they look silly, possibly also cause I have a tendency of making silly faces, but here I am in need of a profile picture for the Cloudscape website, lucky for me they prefer a drawing then a picture. It's a rather perfect likeness, it feels like I eat paper sometimes at how quickly sketchbooks fill. 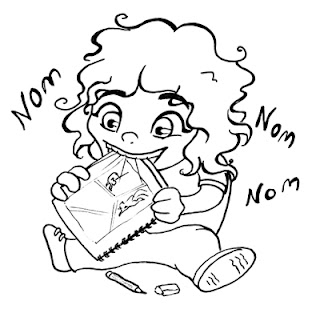 The other one is a mixture from a dream of these lizard like people called Basalisks that can assume different appearances by just "shedding" their skin making them perfect assassins... this coupled with playing Assassins' Creed Brotherhood meant I had to draw him in something like that although in the dream he never wore anything like that nor is it related to any Basalisk myth. Of course it was kind of a fail. The picture gets progressively more terrible as you go past his waist. I need to go back and examine clothing in manga, I have a fair idea how to outline the unclothed bits but not the clothes... You can expect that in my next post. 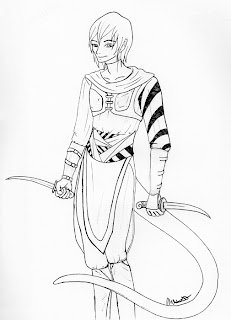 I was trying to get some more practice in for hair so I was doing heads with different hair styles... I was also aiming for sort of different facial features... I mixed up on the face on the bottom left one. 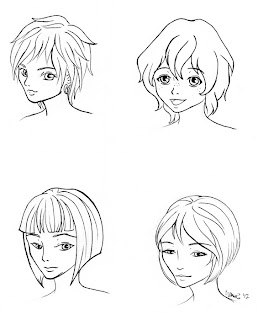 Then my next monster submission... it may look cute but this is an Ekkisbird... it could be vicious... We really need everyone to vote! The creatures are supper cool and if people could just peek at them and vote that would help a tone. Also there are now some write up about wining monsters that can be found here. 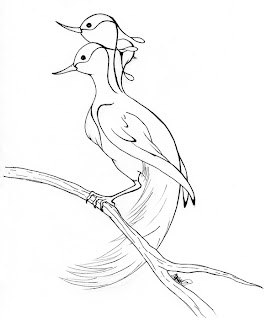 These were done over the course of Summer Festival that happen yesterday, they are less then perfect to say the lease as I had to stop often to man the table and was often distracted by so many other things. Over all a very good event! Had fun, sold lots a stuff and meet some new people.

First I have some dancing robots of sorts... not great at all... definitely needs research if you are trying to make things dance. 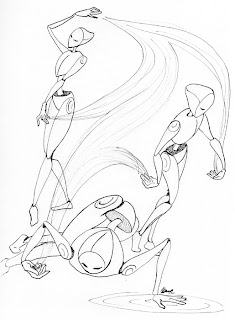 And the second was more of a quick sketch for a dress idea that was based on origami... I'll probably make it some day. 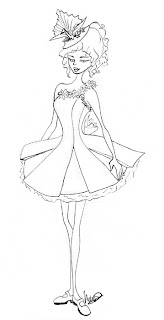 I hate it when I stare at a blank paper and my mind goes blank. Last week I put together a script for a short story based on the characters I've been putting up and I was really focused on it that I finished writing it in two days but then my mind went blank for drawing for like the rest of the week. What I should have done is forced myself to draw... but I got lazy I suppose. So that is why there has been no updates. But I'm back.

First I've got my next monster for the Cloudscape Monster Alphabet. If you haven't voted last week well you should!  This is a Degyt! 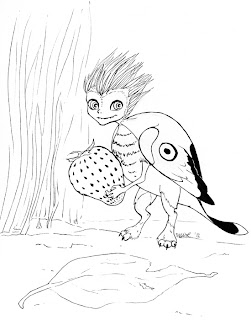 I was looking up fashion illustrations the other day and it sort of stuck with me, I like turning flowers into people... more like I like turning them into girls in ridiculous outfits. It was interesting trying to do something that is black... I need to experiment more as to where to put shines so that it's all readable. With this one I drew in the shines and then inked around them I'm not confident enough to just go at it.

Fist we have the monster from the Cloudscape Monster Alphabet please help by voting on monsters or contributing submissions, it's lots of fun. This one even comes in clolour... hahaaha 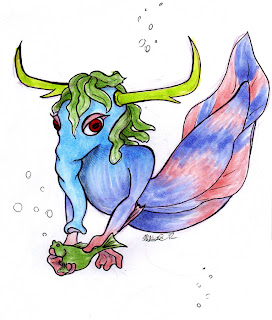 Then we have a monster from the story I'm developing still, this will be a problem... I'm not sure I'll be able to draw them as creepy as I want them to be, I'll have to try and find reference for that too.. hmmm. 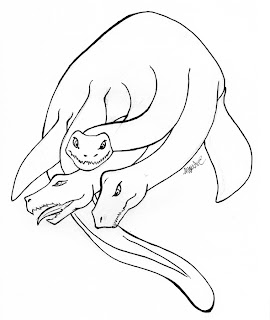 Well it was about time for the other main character to show up... I love this picture actually, Yona (in the back) looks like he's about the throw his book at his older brother. I imagine the conversation was something or another about how Yona is wasting his time and effort in something to do with science and understanding when everyone is focusing on how to get rid of the pesky invaders. I haven't decided on hair colours but I do kind of like the way the black hair looks, I'm just not sure I want Yona to have black hair too. Maybe I'll tone it dark but not black. 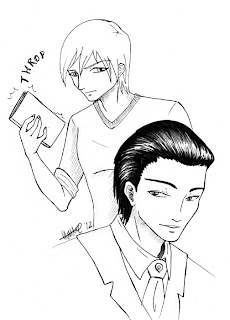 Next we have two of the people that were asked to join this research team that Yona is also a part of. I screwed up the perspective, she was supposed to be down further on the page to make it look like she was closer to the camera while he was in the background... oh well, I'll try again. Also her face is a little screwy, grr. Lia is a robotics expert while Anthony is one of the engineers. 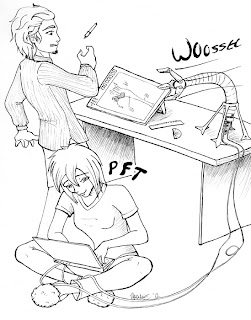 I'm really into this story even though it may consume my life, just as a warning... Ok so here we have some more characters from the story. As I'm writing this I'm starting to wonder just how many characters is too many for a long form comic?

I've even started having names, it's getting advanced now. This is Mako a young shark person. I think I'm mostly getting the hang of this cross hatting the shadows... I just need to start pushing my values which has always been a problem of mine. 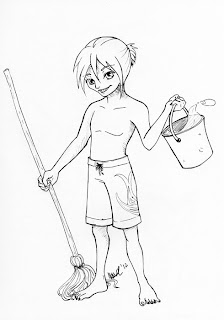 And this is Morgan, a human, I know how boring but they exist in my story rather prominently so I better draw them too. That ridiculous thing he is holding in one had is a snorkel mask and the other is a harpoon... mental note use reference of real objects, may the gods help me when I get to drawing his boat. 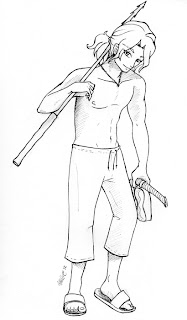 I've changed my mind, the story I was developing is not developed enough to be turned into a comic so I've switched to a different story that I have more ideas for and that has a more solid plot in my head. So instead of faeries and magical creatures you get fishy people and science geeks. =} So here are some fishy people.

First we have the Shark people that don't have a name yet, you are what you eat applies almost literally to his species. I had a hell of a time trying to make him look like he was flicking something back. Originally I wanted him to flick a toothpick at the screen but every time it ended up looking more like he was making bunny ears or quotation marks  in the air and totally ridiculous. 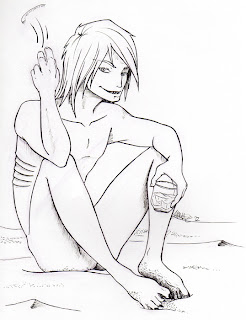 Next we have Enzo, one of the main characters and he's a different type of fishy person (again no name for his specie either)  but their kind are telepathic and are capable of manipulating the state of mater of things around them, like turning water to a solid or ground to liquid. I'm contemplating them not having clothes... it all depends if I can figure out something for them to wear that makes logical sense and doesn't look ridiculous... loincloths are so out. 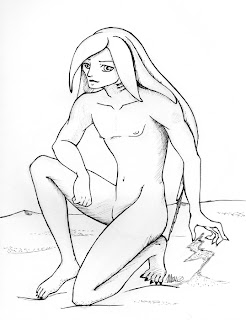 Got another entry for our fun Cloudscape Monster Alphabet. Everyone please vote for your favorite A letter monster! Today's entry is of course with B, Babithy! I had lots of fun with this one, and I like the way the cross hatching turned out. Once Wed. rolls around he'll be a candidate for the name of Babithy, everyone pass the word along even if it's just to vote or if you want to put in your own monster. 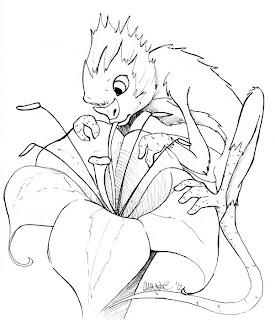 Another picture of the Faerie King from the story I'm trying to develop. That thing going off the page is a spear... bad planning.... bad posing too... moving on, I like his head, but that's about it unfortunately. Grrr. 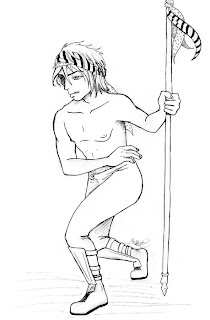